The eosMX or eosMX-P soil gas flux chamber multiplexer connects up to 12 eosAC soil gas flux chambers to your Los Gatos Research, Picarro or Gasmet (additional gases below) gas analyzer for measurements of CO2 CH4 N2O. The eosLink-MX software allows you to easily manage multiplexed eosAC chamber schedules. The eosMX works with a number of leading gas analyzers, and is the only recirculating multiplexer available for the LGR UGGA and Picarro analyzers.

Your Choice of Chamber Multiplexer

Eosense’s eosMX-P rugged portable soil gas flux chamber multiplexer designed to complement portable analyzers, such as the LGR UGGA, Picarro’s GasScouter and Gasmet’s DX4040. The eosMX-P is housed in a military-grade case to protect it from the rigors of life in the field. 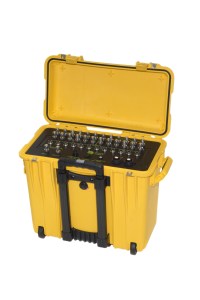 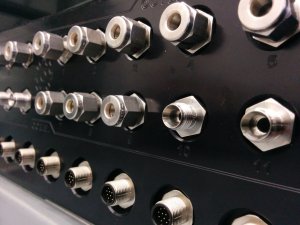 The eosMX is designed to fit neatly onto the Picarro G2000 family of greenhouse gas analyzers, for convenient system setup in the field.

Tropical rainforests are large sources of carbon dioxide (CO2), nitrous oxide (N2O), and methane (CH4), which are known to be potent greenhouse gases (GHGs). Despite this, greenhouse gas flux in tropical rainforests is not well studied due to the difficulties of deploying and maintaining equipment. This gap in knowledge is a considerable issue since it is poorly known what factors control the sources and sinks of GHGs from tropical ecosystems, and in particular tropical soils, which makes it difficult to try and estimate how climate change will influence these dynamics. Understanding the controls–typically soil temperature and moisture, but also other factors including slope and soil texture–on soil O2 and GHG concentrations and fluxes across different landscapes will help us to better understand the potential changes that climate change may have in the future on GHG balances.

The big question is how will different land types, including tropical forests, be influenced or affected by climate change, and to what degree? The first step in answering these large questions is to understand what is currently going on in the system.

The experiment takes place in the Luquillo Experimental Forest (LEF), a tropical montane rainforest in northern Puerto Rico. Rainfall amounts in this area average 3500 mm to 5000 mm per year, making it a very wet place, and unsurprisingly the steep topography of the forest influences where all of this rainfall accumulates.

Dr. Whendee Silver’s team has set out to explore the hypothesis that slope, rather than soil texture or climate, is the most important predictor of soil O2concentration and GHG flux. Slope influences drainage properties in various topographies. This has a large influence on the redox potential of the soils on a ridge versus a valley; at a ridge you would expect to see very little standing water and oxic soils, and thus a high redox potential, whereas in the valleys you would expect to see standing water, little O2, and high amounts of CH4 gas being anaerobically produced and emitted (low redox potential). In the spaces on the slope in between the ridges and valleys, we would expect to see increased N2O production as the soil transitions from being oxic to anoxic (or well drained versus poorly drained).

It is important to note that soil particle size is a confounding factor of this study, given that finer particles will move further down slopes than larger ones, creating a particle size gradient along with the slope gradient. To work around this, Dr. Silver’s team has future research plans to set up their experiment in such a way that will allow them to compare different gas species and fluxes of varying soil textures for each topography.

“The high temporal resolution data set that we have been able to acquire [with the eosAC/MX system] is flexible, robust and allows us to track changes in the system efficiently. It’s a very exciting tool to be able to work with” – Christine O’Connell, Post Doctoral Researcher in the Silver Lab

To study these GHG flux dynamics, Dr. Silver and her team required continuous direct flux measurements at fine temporal scales. GHG dynamics can vary rapidly, producing occasional but large “hot moments” of large fluxes from a given location; capturing these short-term dynamics will allow estimations of whether short-term moisture or oxygen fluctuations may drive these large emission pulses. In order to acquire measurements in such detail, an eosAC autonomous closed chamber system and Picarro G2508 cavity ring down spectrometer gas analyzer were necessary. When asked about how it was decided that the Eosense system was the right system for their work, Dr. Silver is honest in her response, mentioning that initially they had wanted to build their own chambers. Not long after this decision, they realized that the true cost of doing this was much higher than expected and they began searching the market for existent instrumentation. What made Eosense the winner in Dr. Silver’s eyes were the eosAC’s form-factor and design, which minimize the probability of it catching on vegetation during sampling, as well as the fact that it is specifically designed to work with the Picarro G2508, one of the few gas analyzers that can measure all of the gas species of interest in their study.

At their LEF site, the Silver lab has erected a small shed which houses all of the equipment that cannot get wet including the Picarro G2508 and computer monitor, as well as their generator (Honda EU2000i). From the shed radiates a series of well-marked tubing leading towards the eosACs themselves, dispersed between 10 to 30 m away from one another. Each eosAC was pegged down using tent pegs to ensure that none tipped over on the steep slope. Every ten minutes the chambers would close and begin taking measurements.

The compatibility of the eosACs and eosMX with the Picarro G2508 allowed for smooth data collection and processing, making the whole process that much easier for the Silver lab.

Preliminary data suggest that Dr. Silver’s hypothesis of slope being an important dictator of greenhouse gas and O2 fluxes appears to be on the right track. The field transect data show a pattern where high-levels of O2 are seen on the ridges. Moving down the slope, CO2 begins to show up as the dominant emitted gas mid-slope. Also, as predicted, the valleys were net sources of CH4, likely due to anaerobic production in water-laden soils. These findings would suggest that slope does play an important role in determining O2 and GHG soil flux, although further studies are required to say this with any certainty.

It’s Not Over Yet

The field study in Luquillo will be expanding in the future. Dr. Silver’s team will be joining forces with another eosAC user to combine resources, totalling 21 eosACs, 2 eosMXs and 2 Picarro G2508s.The plan is to sample two different areas with similar topography but with two distinctly different mineralologies (eg. soils derived from different rock types) in order to help disentangle the soil type and slope controls on the total GHG fluxes.

The improved understanding of how upslope and downslope GHG dynamics vary across landscapes and with changing climate will ultimately be used to improve global climate models thereby enhancing our ability to project future climate change impacts with better accuracy.

An array of eosACs deployed on the forest floor in Puerto Rico. Photo: Christine O’Connell