The traditional company Holzbau Schmäh in Meersburg on the Lake Constance has developed more and more into a specialist in the field of historic building restoration in the last two decades. Owner Sebastian Schmäh is already carrying on his family’s tradition of building carpentry in the sixth generation and now employs around 40 people. Numerous awards are proof of the success story of the traditional company. For example, Holzbau Schmäh received the Baden-Württemberg State Monument Award in 2012, 2014, 2018 and 2020 and even the Federal Award for Craftsmanship in Monument Conservation in 2019.

“There is life in wood, it is a piece of nature. Just imagine: Trees develop from seeds, and trees, after years of growing, provide the material to build entire houses.”Holzbau Schmäh

The new Vineum in Meersburg on Lake Constance

The House for Wine, Culture and History in Meersburg on Lake Constance regularly hosts various exhibitions. In addition, since the restoration visitors can learn a lot about the regional history and culture of wine in a tour on 600 square meters. A special attraction is the Torkel in the wine press hall of the Vineum, one of the oldest and largest still functioning wine presses on Lake Constance. The attached arched cellar offers the opportunity to taste various wines of the region. In 2014, the renovation work of the old Holy Spirit Hospital in Meersburg began and was completed in 2015.

“As a modern and sensual experience house for wine in a historic building monument, the Vineum has an absolutely unique selling point. The house itself has such archaic power and sets almost no limits to creativity!” (Christine Johner, Head of Department for Culture and Museum in Meersburg)

The greatest challenge in the restoration of the Vineum was the original surfaces, which were protected as monuments and were not to be damaged as far as possible. Furthermore, the wooden timbers were installed in a very hidden way and were partially covered. This made them difficult to access for the necessary wood inspection.

The solution: Restoration with the assistance of the IML PowerDrill® 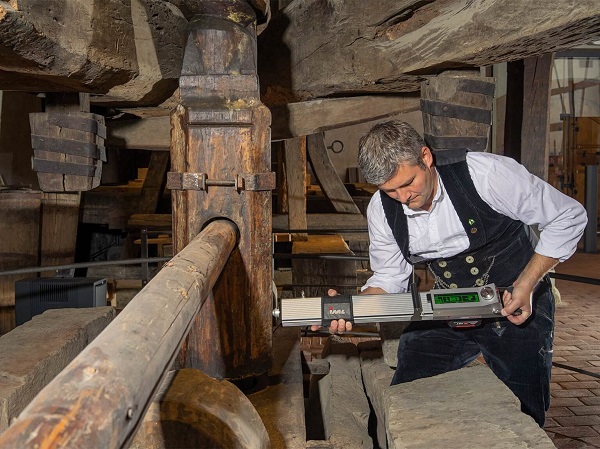 If damage is detected, for example, by tapping or test drilling, its extent must be measured and localized as well as possible. In the past, restorers approached this on the chance. Where does damage begin? Where does it end? Damaged wood was removed piece by piece until healthy wood was visible. Often, however, far too much was removed. This is particularly regrettable in the field of historic preservation, since woods such as those in the Vineum in Meersburg are usually very old and valuable.

Modern wood testing with an IML PowerDrill® allows much more precise results to be obtained about the condition of the wood, even in the case of damage that is barely visible. Only a fine drilling needle (diameter 3 mm) is drilled into the wood in order to completely record the extent of the damage inside the wood with the help of drilling resistance measurement.This makes the process easier to plan and avoids unnecessary repairs. With IML’s drilling resistance measuring device, damage that would otherwise remain undetected can be detected with minimal damage to the wood.

Examples of damage that probably could not have been found without the IML PowerDrill®:

Damage is often not visible from the outside and cannot be detected even by tapping, for example, which can have dangerous consequences. This scenario occurred during the renovation of the Vineum. A wooden timber truss in the roof floor did not appear to have any damage according to conventional inspection methods. However, drilling with the IML PowerDrill® then showed that there was very definitely significant damage and even that the load-bearing capacity had been affected. If the damage had remained undetected, major hazards would have occurred sooner or later.

Another example concerns the gigantic center column on the first floor of the Vineum, which carries about 40 tons of weight and forms the most important node of the building. Only with the help of the IML PowerDrill® could a decay in the inside be detected. A whole 15 cm were affected, which Holzbau Schmäh could now treat in a targeted way. 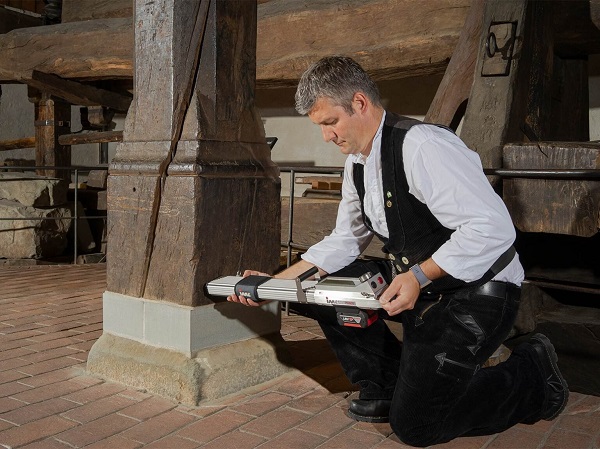 The IML PowerDrill® allows you to look inside the wood without causing serious damage to the surfaces. This is particularly important in the restoration of historical monuments. You can think of the PowerDrill almost like a pair of X-ray glasses. In the past, a hole had to be sawed to make hollow spaces visible. Today, a small hole with a diameter of just 3 mm is enough for the wood inspection.

Mr. Schmäh also mentions the use of the digital printer as another advantage. In general, the digital display of a drilling curve is ideal, but the printout also makes it easy to explain the facts to the customer. He also appreciates that the measurement curves can be used perfectly for teaching purposes in his own company.

Preliminary examinations with the IML PowerDrill® are useful for all parties involved in order to be able to realistically assess the necessary extent of a repair at an early stage. In this way, unnecessary repairs can be avoided and previously undetected damage can be detected. This saves costs for the owners and can result in new orders for the restoration company.

“Because of the relatively high purchasing costs, the decision for the device was not easy to make at the beginning. Now that we know what it is capable of, we can smile about it today. After only a few drillings, the principle is already understood. So the device quickly comes into its first use” Sebastian Schmäh

Digitalization in the craft industry is currently a major topic. State-of-the-art equipment, such as drones or the IML PowerDrill® is moving in the right direction. This makes the profession exciting and hip again, because it combines old buildings with state-of-the-art technology. “Young people love this and they enjoy it. Today, I can say the IML PowerDrill® is a must-have that has played a very significant role in our awards. Almost certainly, it will continue to win us more awards in the future.” Sebastian Schmäh